The exhibition seeks through a careful selection of around eighty original works – models, drawings and collages – to evoke a number of urban projects by Christo and Jeanne-Claude, whether or not these were ever carried out, ranging from Wall of Oil Barrels, Rue Visconti, Paris, 1961-62 up to the important urban project The Gates that Christo and Jeanne-Claude realized for the city of New York in 2005. The exhibition also seeks to show, in its display, the major significance of the drawings for the genesis, evolution and aesthetic crystallisation of every project. The drawing is, for Christo, "a path toward the real" to which he devotes himself daily with passion.

Since the early 1960s, Christo and Jeanne-Claude have been developing temporary projects around the world based on a unique model. They occupy a central and unique place in the history of contemporary art.

Their projects, which were self-financed through the direct sale of original works by Christo guaranteed their artistic freedom. It also allowed them to give the public free access to each of their projects and to share their ephemeral beauty with them.

Special status will be given to three projects that marked a milestone: The Pont Neuf Wrapped, Paris, 1975-85; Wrapped Reichstag, Berlin, 1971-95; The Gates, Central Park, New York, 1979-2005 with a series of emblematic works, from preparatory drawings – usually in small format – to the final designs, complex collages, often on a large scale, where colour, the effects of the material used and the volume accentuate their visionary nature and, as such, are very close to the reality of the projects in situ.

The history of the projects and their reception by the public will also be highlighted through a selection of photographs by Wolfgang Volz presented on large LED screens.

Christo will give a lecture at Flagey (Studio 4) October 23th at 7 pm, a unique opportunity for a large audience to meet the artist.

A catalogue with texts written by Matthias Koddenberg and Laure Martin, published in three editions – French, Dutch and English – will accompany the exhibition. All the urban projects of Christo and Jeanne-Claude will be commented and illustrated.

An exhibition of ING Art Management 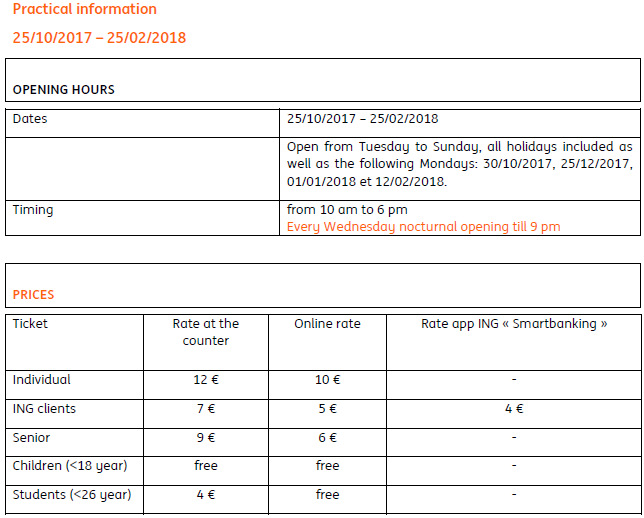